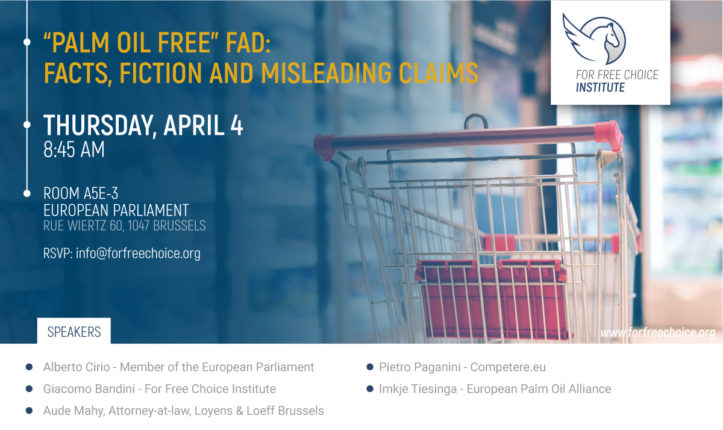 “As Member of the Committee for public health and food safety, I have devoted a considerable amount of time working on this topic, expansively analysing all aspects involved in the use of palm oil in food, from health related issues to environmental sustainability.

Wide scientific analysis has shown that palm oil, among other products, can only become harmful if treated at very high temperatures by releasing a substance considered carcinogenic. As a matter of fact, the European Food Safety Authority last year came to more reassuring conclusions for consumers, raising the safety limits for such harmful substance and subsequently requiring European legislation to be drafted accordingly.

Based on this, I committed myself to a fight against “palm oil free” misinformation in the public domain and extreme palm oil enemies.

During the past few years, several events related to some food products have made it clear that large commercial chains tend to promote products not by advertising the ingredients they contain, but those that they do not contain. This is a very equivocal practice, which confuses consumers and leads to purchases in a misleading way.

The wording “palm oil free” has become a real commercial claim and has given rise to numerous advertising campaigns. The problem is that such wording distracts attention from what is in the product instead of palm oil.

From my point of view, this is not acceptable. Such “slogans” have nothing to do with health having considered the scientific evidence”.